Boil with hops for 90 minutes.

Cool and ferment with a good quality ale yeast.

William Black had fitted out the former Paper Mills by the Wellington Suspension Bridge in Aberdeen as a brewery – the Devanha Brewery. His Devanha Porter – a dark beer resembling stout – became famous throughout the UK, the Brewery being conveniently close to the railway halt at the Cattle Bank. The Brewery continued to be run by William Black & Co. until about 1912. It was acquired by Thomas Usher & Son Ltd of Edinburgh in 1930 and ceased to brew. Ushers of Edinburgh used it as a bottling plant for Usher’s own beers and as a distribution centre.

Vaux Breweries Ltd acquired Usher’s Park Brewery, St Leonard’s Street, in 1959. The Devanha company name and registration was still in existence but It was changed to Norseman Lager Co Ltd and used it to launch that product in Scotland in about 1974. Usher’s was acquired by Allied Breweries in 1980 when it ceased to brew, but the Devanha, alias Norseman, name remained with Vaux Breweries Ltd and now, presumably, languishes somewhere deep in the archives of AB Inbev.

William Black & Co. also ran the Devanha Distillery, built about a mile upstream from the Brewery in 1825; it went out of production in 1909. 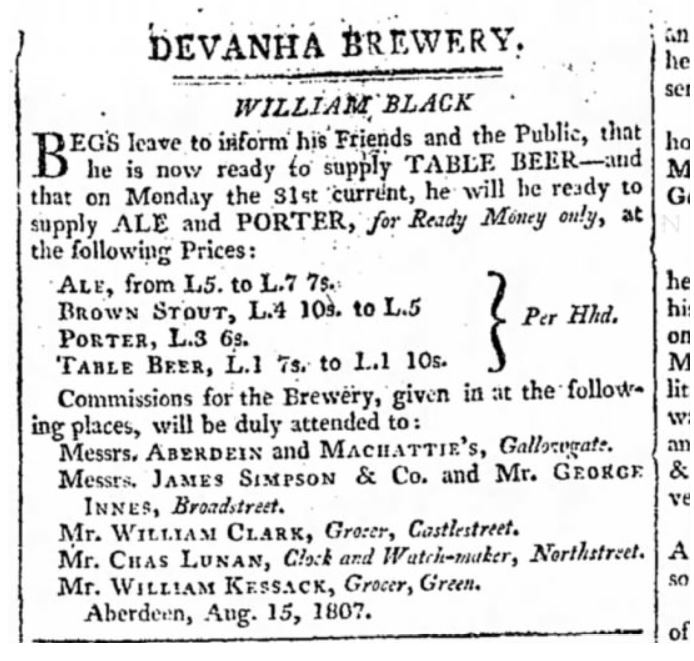